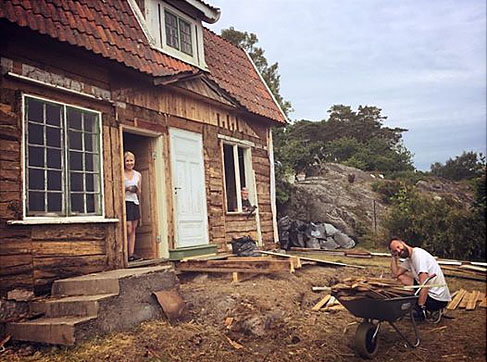 When Bertil Johansson started to renovate his house he found a block-building under the outer board panel. This was somewhat unexpected as this house has always been considered to be a common villa built during the very first years of the 19-hundreds. Very experienced carpenters managed to lift the house so that blocks in the lower part of the walls could be replaced. From these replacements a number of crosscut samples were collected. After careful sanding of the surfaces these samples have been scanned on a 2400 dpi Epson scanner. The images were then taken into CooRecorder for measurements and CDendro for crossdating. 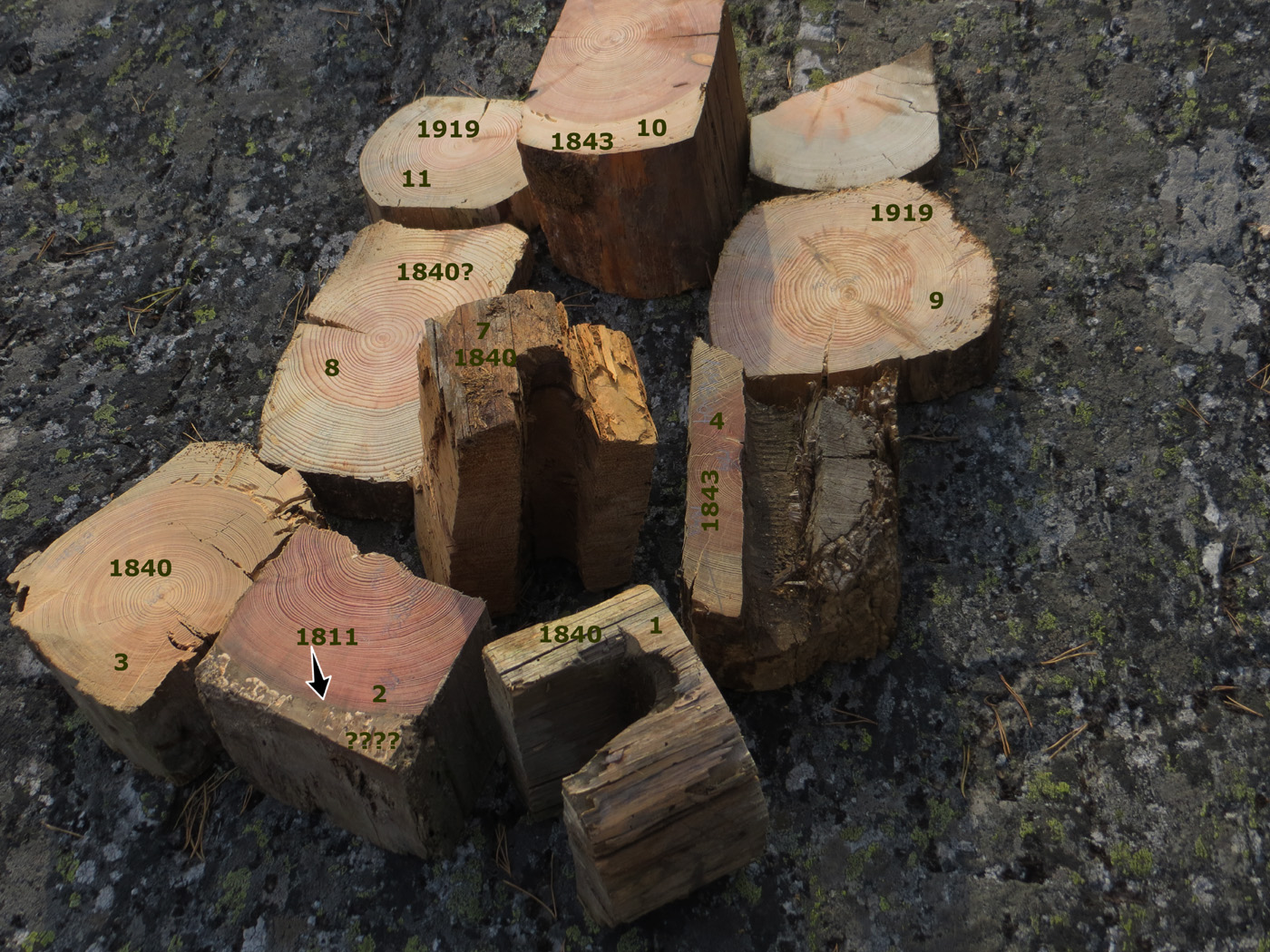 Sample number 1, 4 and 7 might look a bit peculiar. They all represent the end of a block with a slot at that end. These ends have been close to a door or window opening in the wall. When mounted in the wall with the slots directed vertically, a governing lath was inserted to make the blocks stay in their right position exactly above each other. (In Swedish that lath is named a "gåt" and the slot is named "gåtspår".)

NMBJ02, no waney edge. The outer section of some 40 rings cannot be confidently measured because of decay and wood worms. The inner 117 rings can be confidently crossdated to 1778 (0.60/7.9) giving the outermost visible ring the year number 1818. We can only say that this tree was cut after 1818.

NMBJ03. The outermost 116 rings can be confidently measured and crossdated towards the Nämdö reference at 1840 with corrCoeff/T-value=0.57/7.4 covering 1724-1840. An inner section covers 40 more rings though crossdating towards the Nämdö reference indicates two missing not visible rings. This sample probably has remainings of a waney edge and if so it is contemporary with NMBJ01.

NMBJ04. The outermost 131 rings of this sample can be confidently measured and crossdated towards the Nämdö reference at 1843 with corrCoeff/T-value=0.56/7.6
It has a clear waney edge, so its felling time was in the winter 1843/1844.

NMBJ07. Two radii can be measured though only one with waney edge. When measured and crossdated, the longer radius was found to have three false rings. Though a crossdating of the whole sequence of 183 rings nevertheless hits at 1840 with a T-value between 3.5 and 4.9 depending on the normalization method used. An extended block length test in CDendro then tells that 1840 is a really good candidate for crossdating. A visual inspection of the curve fitting between the sample and the Nämdö reference curve indicates the first problem at ring 145. So if the outer section 0-144 is then separately crossdated towards the reference we get a corrCoeff/T-value=0.58/8.5 at 1840 saying that this tree was cut in the forest in the winter 1840/1841.

NMBJ08. Two radii though only one of them has a clear waney edge. It contains only 45 rings. Crossdating this without "a helping context" is not possible. Anyhow a mean value of the two radii crossdates to 1840 of the Nämdö reference with a CoffCoeff/T-value of 0.45/3.3 As other samples from this house can be confidently crossdated towards 1840 and 1843 we might assume that NMBJ08 should also be dated to 1840.

"Helping context": In practical dendrochronological work you often have several samples from the same context, which can support each other for a certain crossdating towards a reference, even if they taken one by one may give a little too low crossdating values. See "What is a good T-test value" in the section "More on dendrochronology" at www.cybis.se/forfun/dendro.

NMBJ09, 69 rings. Crossdates to the Nämdö reference at 1919 with a corrCoeff/T-value = 0.59/5.9 Depending on normalization method the T-value varies between 5.6 and 6.4 and with "the helping context" of the other samples from this house we can confidently say that this sample was cut in the winter 1919-1920.

NMBJ10. This is sort of a perfect sample for crossdating where all the 188 rings can be confidently measured with the whole series crossdating towards the Nämdö reference at 1843 with a coffCoeff/T-value = 0.53/8.4

The house was built with blocks cut in the forest after the growing seasons 1840 and 1843. We might assume that the house was finished some year after 1843. The two blocks from 1919 indicate that there has been some reconstruction done on the house possibly in 1920. Sadly, we know little about where these blocks have been placed in the house so we cannot say anything about where the reconstruction of 1920 was done. With more information it might also have been possible to understand why we have these two cutting years 1840 and 1843.

Some samples from boards

NMBJ21. Crossdates to the Nämdö reference curve at 1862 with corrCoeff/T-value=0.56/6.0 As the board has no waney edge we can only say that this board was made "not before 1862". The series crossdates somewhat better towards a series from the island of Gotland (0.63) which might indicate that the board does not come from a tree grown on the island of Nämdö.

NMBJ22. Crossdates to the Nämdö reference curve at 1868 with corrCoeff/T-value=0.51/4.2 but as the board has no waney edge we can only say that this board was made "not before 1868". The series crossdates better towards other series e.g. Gotland (0.72), Estonia (0.68) and Saltsjöbaden (0.67). This indicates that the board does not come from a tree grown on the island of Nämdö.

NMBJ23 and NMBJ24. These two boards (78 and 86 rings) look the same and are of almost the same dimensions. They match towards each other (0.67/7.6) but they do not match towards the Nämdö reference and none of them has a waney edge. A mean width value curve was created from them and set as the reference in CDendro and then the command Test towards undated reference was run from a collection consisting of some 50 reference curves from various areas. This turned out as a match towards the series "NorrlandTradedPISY", see Useful references with the end year 1778 and CorrCoeff/T-value = 0.61/7.0 We might assume that these boards have been bought from the main land and put onto the house some time at the end of the 18-hundreds or at the beginning of the 19-hundreds when the Norrland lumber mills and the Norrland wood trade had grown up.  As we have no waney edge we cannot be more exact than that.

NMBJ25. This is a 29 centimeters wide floor board with waney edge and 145 rings. When tested towards references from other regions, the end year 1898 comes out as a strong candidate. - When the seven best references (from Dalarna, Estonia, Gotland and even the near mainland) are grouped together into a mean value curve, the 1898 match gets a quite high corrCoeff/T-value of 0.51/7.1 meaning that the winter 1898/99 is probably the correct felling season for that tree. We can also say that this board does probably not originate from a tree grown on the island of Nämdö.

The .pos files and .jpg files for each sample and the collection file are available within a 23 MB .zip file as
dataNMBJ.zip